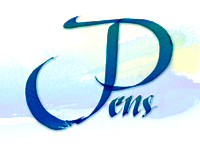 Member of Colleagues of Calligraphy, since 1980, a fantastic group of people and resources for appreciating, enjoying, learning and applying calligraphy. In 1980 I attended a meeting in Colleagues meeting in St. Paul. Donald Jackson, calligrapher to the queen of England, was speaking. I realized my love of letters, letterforms, words and art (which began when I was an elementary student), was also shared by many others. I have taken many classes through the Colleagues, either with instructors they bring in or at national conventions. I have taught classes, served on the board and was librarian of their extensive collection for many years.

​Private and commercial commissions are most often on paper, but have also been on walls, wood, stone and furniture.